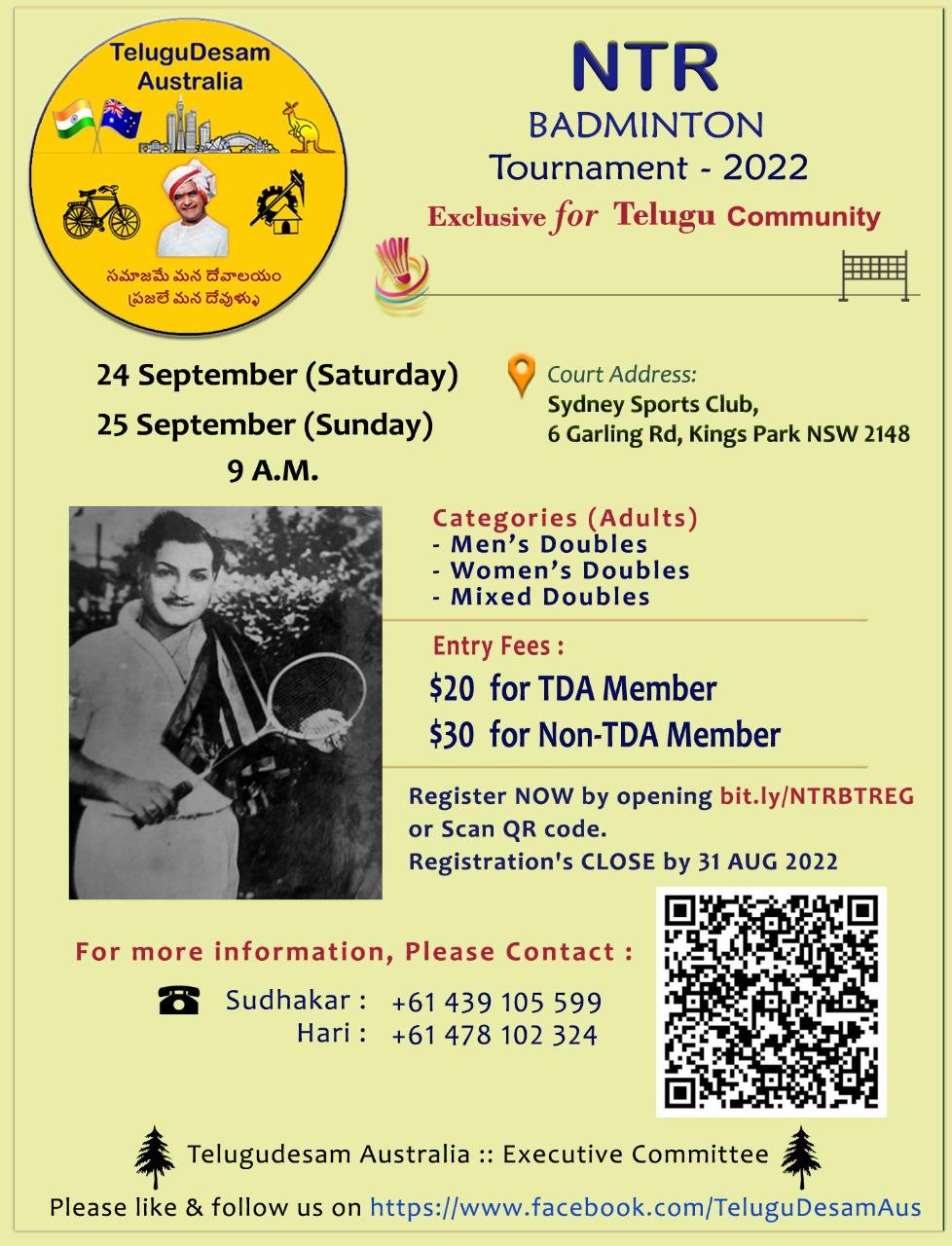 Not verified
TeluguDesam Australia
61 0439105599 telugudesamaustralia@gmail.com View all tournaments of this organizer

Telugudesam Australia Account BSB: 062339 Account number: 11026807. Please send the payment snapshot to telugudesamaustralia@gmail.com. Teams that have not made payments before the deadline will forfeit their registrations.

Please NOTE 2022 NTR Badminton Tournament event is exclusive to Telugu speaking players or one of the spouses speaks Telugu.

All players submitting entries for the tournament will be deemed to have read and accepted the conditions, rules & regulations under which the tournament events are to be conducted. The Tournament Organiser will NOT be responsible for any injury sustained, at any time, by any player or official arising from their participation in this Tournament. While every possible care is taken to provide the participants with a enjoyable experience at the event, it is expected the participants and individuals attending the event are doing so willing at their own care and responsibilities. Players agree to indemnify the Tournament Organiser, its officers and agents against all claims, demands, actions and liabilities of any kind (other than due to wilful negligence) arising in the course of participating in the Tournament. Any costs incurred for medical treatment and/or hospitalisation shall be borne by the player or Member Association of the player/official concerned.

Entries: Entries are lodged by players via Play Matches software.  Entries may be closed early if maximum no. of entries have been received in an event. The Tournament Organiser has the rights to reject an entry. Therefore, players are reminded to submit your entries and payment as early as possible.

All entries must be PAID before Registrations ends, otherwise the entries will NOT be included in the draw.

1.  Players are expected to follow sportsman-like behaviour, and show respect to opponents, officials and tournament organizers. In the event of a complaint, the match referee’s decision is final.

2.  Any aggressive or un-sportsman like conduct will result in players/teams forfeiting their game and will be ejected from the tournament.

3.  Players may be requested to umpire or line-judge some matches by the Tournament officials.

4.   Appropriate badminton attire must be worn when on court. Non-marking shoes must be worn at all times in the hall. If anyone is found with shoes that mark, they will risk disqualification.

5.  No refund of entry fee is available except for allowed withdrawals or events cancelled by the Tournament Organiser.

1. Regulations: The tournament will be conducted in accordance with the Laws of Badminton adopted by the Badminton World Federation (BWF), subject to modifications by the Tournament Organiser/Referee.

4. Draws: The draws will be conducted by the Tournament Organiser after 31 AUG. As mentioned above, only teams and players whose payments were confirmed will be included in the draw.

5. Notification of withdrawal(s) with injury reason must be given to telugudesamaustralia@gmail.com